Get In Touch
X

Sunday – Thursday. Enjoy bed and breakfast, a complimentary bottle of wine when dining at the Lion and a guaranteed early check in and late check out. Terms and conditions apply.

Malpas, where The Lion is of course based, dates all the way back to the Norman conquest of 1066 and is even recorded in the Doomsday Book of 1086! With nearly a century of history surrounding it, the village surely holds its fair share of secrets. If you’re thinking about coming to stay at The Lion, then why not spend a little time with us now learning all about our home?

The History Of Malpas

Deriving from old French, Malpas interestingly means ‘bad/difficult passage’, we wonder what the landscape must have look like all those years ago to garner its name?

Malpas’ castle once stood above the village roughly where our St. Oswald’s church now resides. The castle was used to protect Cheshire’s western border from the Welsh; these included motte-and-bailey castles at Shotwick, Dodleston, Aldford, Pulford, Shocklach, Oldcastle and Malpas. The earthworks of Malpas Castle are still to be found to the north of St. Oswald’s Church – it’s definitely worth a wander round if you enjoy an evening stroll out.

You may even spot the four cheeky gargoyles that stare down on this pretty scene from the porch of the magnificent Church of St Oswald’s, which was completed in the 15th century and which stands on the summit of a large knoll. Hidden behind the churchyard, there is another knoll, eerily surrounded by a ring of ancient gravestones. In Norman times the mound supported a keep that enabled the barons of Malpas to protect their domain from possibly invasion from across the border.

Yet perhaps the most striking feature of Malpas is its abundance of black-and-white buildings that still stand today, including a fine example in Old Hall Street which has won a conservation award. Preservation of the past is matched by sensitive development in the present, particularly on the site of the former Old Hall Farm, where modern residences, which are set around a series of courtyards, have been given black-and-white gables in keeping with the town’s architectural tradition and medieval street pattern.

When it comes to The Lion at Malpas (formerly The Red Lion as it was known back in the day!), Richard Lever, the fourth member of his family to be the publican at the Red Lion, is the owner of Malpas’ famous three-legged chair along with other residents of the village. This artefact was used, according to legend, by James I when he watched a cockfight during an overnight stay at the inn.

The story goes that the King joined the curate and the rector for a few flagons of ale during his stay but became so incensed when the rector refused to pay for a round that he ordered the promotion of the curate to the same rank as his more senior colleague, and so it was that Malpas ended up with two rectors, rather than one!

Malpas is surrounded by fields and woodland which are sure to hold a tale or two but the best way to find out is by getting out there yourself! There are many walking routes throughout the village and beyond so there’s always more to explore.

And after all that adventure why not put your feet up and have a drink or two with us? You might even be able to catch a glimpse of the famous three-legged chair! Dogs are of course welcome; they need a rest too! 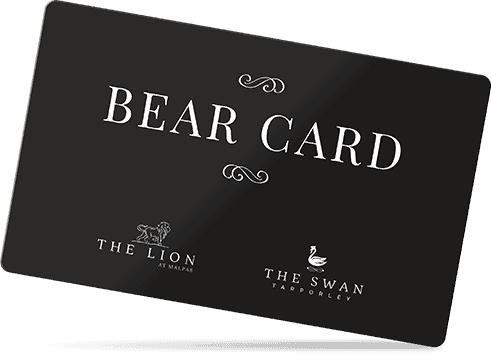 Sign up for an exclusive Bear Card today & receive a point for every £1 spent with us.

Keep up to date on all our news